When I reached Bogota with my friend Isa in early March, it was with the intention of spending some 10 days there to get myself in gear and start off again … but this was before my friend Julian’s generous hospitality, meeting so many new interesting people, visiting the ANATO exhibition, giving presentations in universities … and the unfortunate and obligatory renewing of my tech equipment right in the middle of my trip!

Feeling right at home at Julian’s 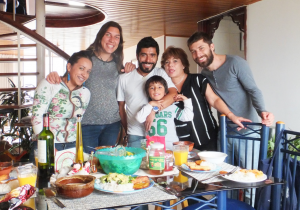 Four years ago, I lived and worked for a few months in the south of New Zealand, at the Mercure Hotel in Queenstown (Hôtel Mercure à Queenstown).  There I met Julian; we both worked as waiters at the hotel’s restaurant. When he left, he told me that I would always be welcome in Colombia.  (Come on: you must be careful when you say things like that!) When I arrived in Bogota, Julian added: “My house is your house; stay as long as you wish.” So I took him at his word and ended up the entire month of February as his housemate, along with his brother Brian, his friend Manu, his daughter Aaron and his Mom Gladys.

That was a rather special month: I had just spent January travelling through north-east Colombia with my fried Isa who had come from France to join me so we could share some adventures, and just before that, I had stayed put for a month and a half on a magical beach in Panama where I fell in love with a really nice guy, but it was an impossible scenario, just like in the movies…

So I was about to hit the road again after a hiatus of two months, trekking through this new Continent (South America) and living the second chapter of my great adventure, ten whole months of roaming from Colombia to Argentina. But then, nursing a broken heart and feeling sad because my friend had just left… and (wouldn’t you know it) with my audio-visual and tech equipment starting to give up on me…  for a few minutes I even considered packing up and going back to France. However that was without counting on the support showered on me by Justine and Mahery (my Hopineo colleagues), Julian, Brian and Manu, and… by you!  After a few quiet chats, several comforting beers, some welcome laughter and a crowdfunding effort (a huge thank-you to all of you!), my smile and enthusiasm shone through once again. I got back to work planning the continuation of my trip which promises to be even richer in opportunities for learning and working for a responsible tourism. It also shows all the signs of precious future surprises and encounters.

Back at University, but this time on Professor’ side 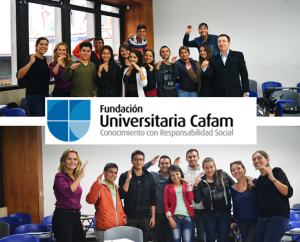 Bogota also meant meeting Natalia (through my Canadian professor at La Rochelle—thank you D’Arcy!). Natalia not only represents Colombia and Ecuador at the Global Sustainable Tourism Council (GSTC), but she is also consultant and professor. This is how I find myself back at university, actually at the Universidad Externado de Colombia in Bogota in front of a group of second-year tourism students, telling them all about my HopTour of Latin America (see the picture at the beginning of this article). I repeat the experience a few weeks later with Lorena (consultant and professor that I met in Managua where she was ending a market study for CBI and the Ministry of Tourism of Nicaragua) in two of her classes at the CAFAM  University Foundation.

One day I would like to teach, so these exchanges with groups of students are very good practice for me! The message that I give them is that with a clear goal in mind, plus some work and imagination, everything is possible. Ever since I was a little girl, I had this dream that when I grew up, I would lose myself roaming around the world. I never had the chance to travel with my family.  I am indeed European and so enjoy a certain amount of purchasing power, but my family was never rich.  I am convinced that the fantastic experience I am living at the moment is available to everyone, and I am happy to be able to share it with others. Maybe I can inspire a few students? 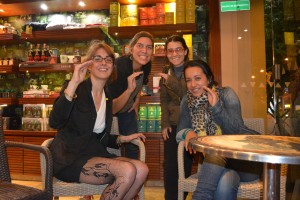 Thanks to LinkedIn, to the many contacts of contacts and the ANATO professional tourism exhibition, I was able to multiply my meetings and encounters in Bogota, and to weave a solid little network for myself in the tourism sector. It also helped me to more easily organize the second part of my trip through Colombia.  For instance, I met the following:

Translated by my friend Hélène from Canada